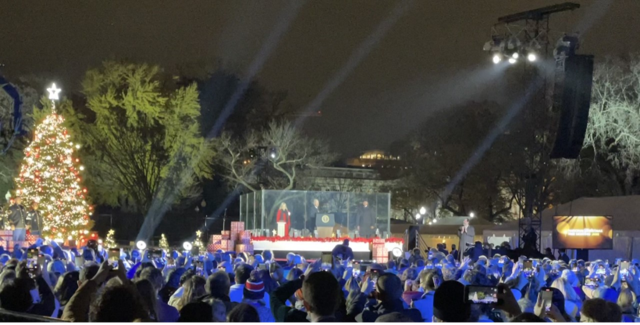 Students at Caldwell Arts Academy are spreading Christmas cheer all the way to Washington, D.C. The fine arts magnet school was chosen out of all the schools in Texas to create ornaments for the state tree at the 2021 National Christmas Tree Display.

“Caldwell Academy is all about opportunities for our stars to showcase their talents, and this is on a whole new scale for us,” Principal Bobby Markle said. “To have their work displayed in our nation’s capital on behalf of the state of Texas is a true honor. When the students found out the scale of this project, they all were stunned that so many people would see it!” 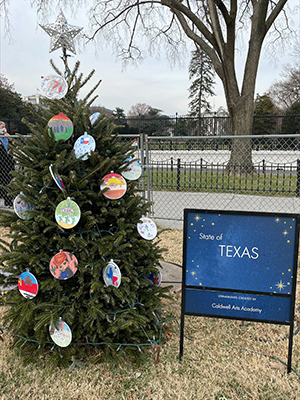 Fifth-grader Quinn Squyres designed one of the twelve ornaments on the Texas tree. Her ornament is featured on the National Christmas Tree Lighting 2021 website.

“I feel really happy to have accomplished getting my ornament on the national tree website and the state tree in Washington D.C.,” Quinn said. “I drew a longhorn, and it is special to Texas and me. My grandparents live on a farm, and longhorns live across the street. This was my inspiration.”

Students from fifty-eight schools across the nation and abroad designed one-of-a-kind ornaments for the display on the Ellipse in President’s Park. These unique ornaments adorn fifty-eight smaller trees surrounding the National Christmas Tree. Each tree represents a U.S. state, territory, or the District of Columbia as part of the America Celebrates ornament display. 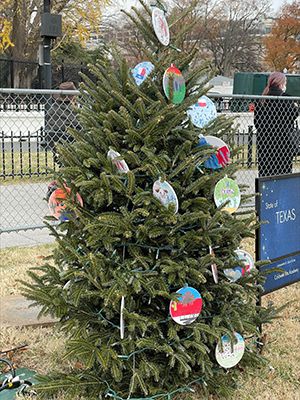