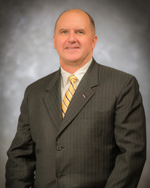 Rev. Fritz Hager, Jr. is the Executive Pastor of Bethel Bible Church in Tyler. Before entering the ministry, he held executive roles at companies in the Dallas/Ft. Worth area and Atlanta, Georgia. A graduate of Robert E. Lee High School and the United States Military Academy at West Point, Mr. Hager served as an armor officer in the U.S. Army and was awarded a Silver Star for valorous action in a mine field outside of Kuwait City. He later earned a Master of Arts in Biblical Studies, as well as his Master of Theology, from Dallas Theological Seminary. He currently serves as a Regimental Chaplain in the Texas State Guard where he deployed in support of the relief efforts for Hurricane Harvey.

Mr. Hager has been married to his wife Sarina for more than 25 years and is the father of six children who have all attended Tyler ISD schools. Prior to joining the board, he served as a member of Tyler Proud, the Tyler ISD Bond Oversight Committee, Watchdog Dad at Owens Elementary School, president of the swim booster club at REL, and in the REL Dad’s Club.